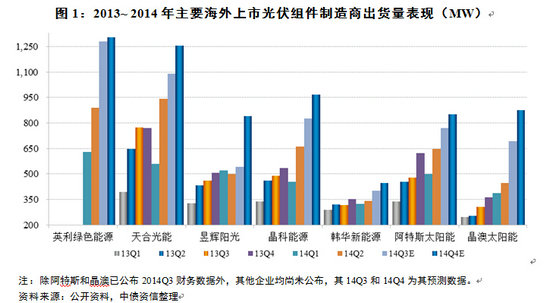 Overseas listed PV enterprise component shipments
Â  Â  Â  Â  In the long run, the core logic of lowering the cost per unit of product, increasing the conversion efficiency of conversion, and increasing the cost of traditional energy and environmental protection is expected to not undergo major changes in the future. Factors such as policy support affecting the short-term performance of the industry will continue to exist. Although the government subsidies in mature markets in Europe and the United States have weakened, demand growth in emerging markets such as China and Asia Pacific will maintain good expectations. In November 2014, the Beijing APEC meeting did not respond positively to the Sino-US PV dispute as expected by the market. It is expected that the US will make a final ruling at the end of this year. We expect that the international trading environment of PV products will still be interfered by trade policies in the future. Not very stable, PV products need to apply the market state financial subsidies to strengthen this problem.
At the beginning of the second half of 2014, the National Energy Administration issued a number of policies to make policy recommendations on the development of the industry in terms of market access, financing support, grid-connected standards, power generation subsidies, etc., considering the 2014 1,400 proposed by the National Energy Administration at the beginning of the year. MW's installed capacity, and in the middle of the year, the total installed capacity reached 35 million kilowatts by the end of 2015 (as of the end of 2013, China's cumulative grid-connected photovoltaic power generation installed capacity of 19.42 million kilowatts), long-term to 2020 China's cumulative installed capacity of photovoltaics At around 100 million kilowatts, we expect domestic demand to be released in the second half or next year. At the same time, we are also concerned that the installed capacity of distributed power plants is affected by various factors such as financing credit support, grid-connected conditions, and power generation subsidies in place. The US â€œdouble-reverseâ€ to China is about to happen, and the European market is shrinking. However, due to the high subsidies and heavy government burden, the Japanese market may brake at any time, which will cause uncertainty in the release of industry demand to a certain extent. 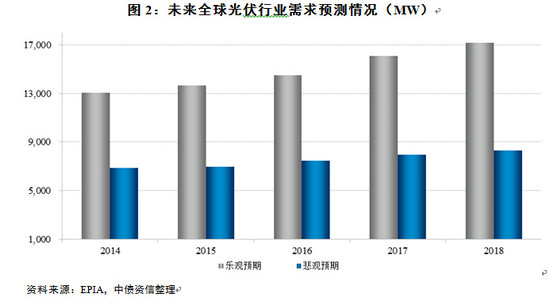 Future PV industry demand forecast
Â  Â  Â  Â  The price of crystalline silicon and components has been stable since the second half of the year. It is expected that the supply and demand relationship will be basically stable throughout the year, but it is necessary to be alert to the industry's capacity expansion impulse.
In the first half of 2014, both crystalline silicon and component prices have declined. Although the country has rebounded slightly after the country's intensive support policies for photovoltaic power plants, the overall price remained stable. The price of crystalline silicon has remained at 20.58~21.23 US dollars/kg since the second half of the year. Although the price is slightly lower than the high level in the first half of the year, the overall price center of gravity is still higher than the 2013 level (the average price in 2013 is 17.29 US dollars/kg). It is expected that the average price of crystalline silicon will still be higher than the same period of last year; the decline in component prices can be explained by the improvement of the overall production process of the industry. At present, the overcapacity of the industry will continue. The large-scale construction of distributed power plants still needs time to verify. The industry as a whole is still relatively cautious about demand expectations. In 2014, the overall supply and demand relationship of the industry was basically stable. However, the supply and demand relationship of different industrial chain links still differs. Although the price of silicon materials has declined this year, the upward shift of the price center shows that the supply and demand relationship of this link has improved compared with last year.

Crystal silicon price trend
Â  Â  Â  Â  At present, the overall supply and demand relationship in the industry is relatively more rational than before. The light assets of silicon wafers and components are more stable, and the industrial climate of heavy assets will reflect greater volatility. The crystal silicon link has formed a higher industrial concentration, and manufacturers can benefit more from the change in supply and demand. With the gradual recovery of the industry, product prices have been adjusted back from historical lows. Some of the early-stage production enterprises have resumed production, while non-stop production companies have continued to expand production capacity through technological upgrading, mergers and acquisitions. Judging from the large domestic PV module companies tracked by China Credit Rating, except for the new capacity expansion plan of Qihui Sunshine in 2014, other component manufacturers have launched large-scale capacity expansion plans, including Yingli, Tianhe and Jingao. The planned new capacity is over 30%. In the current industry supply and demand relationship is still relatively fragile, there is uncertainty in the release of demand, we need to pay attention to the industry capacity expansion impulse. 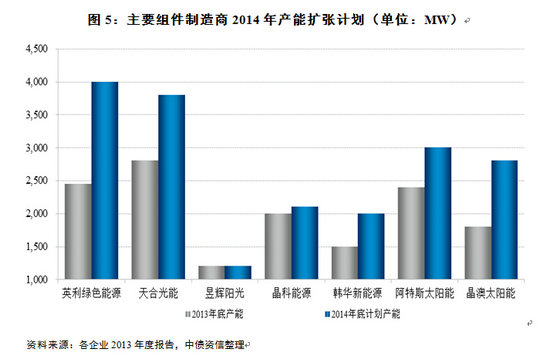 Major component manufacturers' capacity expansion plan for 2014
The profitability of PV companies is diverging, paying attention to the financial pressure of some enterprises.
Â  Â  Â  Â  As of now, most overseas listed PV companies have not released the third quarter financial report for 2014. From the financial data of the first half of the year, the profitability of the crystalline silicon companies and the downstream components of the industrial chain have improved, and the financial leverage of most enterprises is basically stable or slightly There has been a decline, and the debt repayment index has improved, but some companies still have high financial leverage. For example, the asset-liability ratios of Qihui Sunshine and Yingli Holdings are both above 90%. Benefiting from the increase in the price of polysilicon and the further decline in production costs, GCL-Poly turned sharply into profit in the first half of 2014. Grand New Energy also turned losses into profit in the third quarter; invested in more conservative crystals in terms of scale expansion and industrial chain extension. Branch Holdings and Trina Solar are less affected by inefficient assets, and overall earnings performance is better than other component companies. In the future, oversupply will remain the main theme of the industry. At the same time, due to capacity expansion, trade protectionism, and slow development of distributed power generation and uncertain market growth, PV companies will still face great financial pressure. 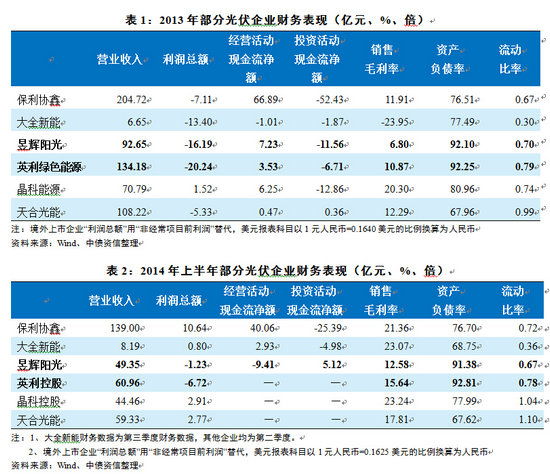 Part of PV business finance in 2013
Â  Â  Â  Â  From the financial data of credit bond issuers and major A-share listed companies, most companies achieved better income growth, but corporate profits did not rise significantly, and even some enterprises showed a significant decline, indicating that the basis for corporate profitability is not stable. From the perspective of bond issuers, the operating income of Jiangxi Saiwei (11 Saiwei MTN1), Yingli China (12 Yingli MTN2) and Tianwei Yingli (11 Wiley MTN1) increased by 46.58%, 11.75% and 4.31% respectively. However, the total profit of all companies declined, and there was a significant differentiation. The total profits of Jiangxi Saiwei and Tianwei Yingli decreased by 25.52% and 51.26% respectively, while Yingli China fell by 116.86%. In view of the fact that all three companies have residual debts, they need to continue to pay attention to their existing credit risks. In particular, Jiangxi Saiwei will have a three-year medium-term notes with a scale of 500 million yuan due on December 7, 2014, in view of the company's Insolvency (as of the end of September 2014, the asset-liability ratio was 103.59%), which suffered losses for three consecutive years, and the funds were occupied by related parties. The company lacked supplementary arrangements for repayment of debts and faced greater liquidity risk and debt repayment pressure. Investors are advised to pay attention to the default risk of the bond. From the perspective of listed companies, the growth rate of revenue of major component manufacturers was different. Both Hairun and Sunflower achieved positive growth year-on-year, but the revenue of Tuoxinxin decreased by 12.52% year-on-year. In terms of profit performance, the three companies also presented Different differentiation, in which sunflower profit deteriorated, total profit decreased by about 238.32%, and after deducting non-recurring gains and losses, the company suffered losses in the past three years. The company issued a non-public offering amount of 300 million yuan in 2012, with a term of 5 years. At the end of the third year, the issuer raised the coupon rate option and the investor's option to sell back. In view of the company's current poor earnings performance, if the investor performs the right of resale, the company may face greater financial pressure and redemption. risk.

Astm A106 B Seamless Steel Pipe